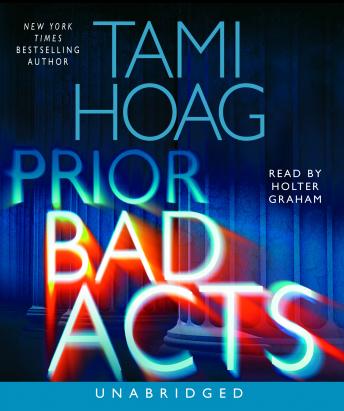 #3 of Sam Kovac and Nikki Liska

New York Times bestselling author Tami Hoag returns with a thriller that begins with a shocking crime scene you’ll never forget and follows two relentless detectives on a manhunt that ends in a chilling confrontation with the essence of human evil.

It was a crime so brutal, it changed the lives of even the most hardened homicide cops. The Haas family murders left a scar on the community nothing can erase, but everyone agrees that convicting the killer, Karl Dahl, is a start. Only Judge Carey Moore seems to be standing in the way. Her ruling that Dahl’s prior criminal record is inadmissible raises a public outcry—and puts the judge in grave danger.

When an unknown assailant attacks Judge Moore in a parking garage, two of Minneapolis’ s top cops are called upon to solve the crime and keep the judge from further harm. Detective Sam Kovac is as hard-boiled as they come, and his wisecracking partner, Nikki Liska, isn’t far behind. Neither one wants to be on this case, but when Karl Dahl escapes from custody, everything changes, and a seemingly straightforward case cartwheels out of control.

The stakes go even higher when the judge is kidnapped—snatched out of her own bed even as the police sit outside, watching her house. Now Kovac and Liska must navigate through a maze of suspects that includes the stepson of a murder victim, a husband with a secret life, and a rogue cop looking for revenge where the justice system failed.

With no time to spare, the detectives are pulled down a strange dark trail of smoke and mirrors, where no one is who they seem and everyone is guilty of Prior Bad Acts.

The storyline was ok. I've read better books by Tami Hoag. The reader didn't change his voice too much from one character to another.

This is one of the very best stories I've heard. It was suspenseful and scary and the characters were wonderful and interesting and felt like real people. I couldn't wait to find out what would happen next, but at the same time I never wanted this story to end! Loved it and highly recommend for lovers of mysteries.

Typically Tami Hoag -- excellent!! The characters were developed well and it kept you guessing.

This was an excellent book. It kept me guessing and on the edge of my seat. I can't wait to listen to the rest of this author's books.

This is my first Tami Hoag book. I enjoyed Holter Grahams reading of the story. This story moved right along and had a nice moral story involved also. Some action, some courtroom drama and some romance. Would recommend it as an all round good story. Will make your commute much more enjoyable.

I really enjoyed this book. Thought it had just enough intrigue and romance as well. The narrator was particularly good, and I could listen to him a lot more.

This was second book by Tami Hoag that I have listened to, enjoyed it and the narration. Am looking forward to listening to another book by her.

Great book! The characters captured my fancy. The suspence made it fun to listen to in the car.

this was a page turner. I enjoyed the story line and the suspense.

This is my second Tami Hoag book and I enjoyed it as much as the first. It was suspenseful and kept you interested from beginning to the end. Holter Graham is the narrator (also narrated Detour by James Siegel) and I felt as if he did a good job with the various voices and the correct inflected when needed. This may sound odd but having the book based in Minnesota was a refreshing change. Many books of this genre are based in Los Angeles. I highly recommend it!

I wasn't sure how well I would like this one but it was really good! It keeps you guessing,it's worth reading

A thoroughly enjoyable listen and as suspenseful as any other Hoag book.

A real good book. Kept me guessing for most of the reading but I did nail one thing, of course, won't reveal it. Don't want to ruin it for anyone else....see if you can guess it.

This is one of the best books that I have listened to. The plot and the storyline did not faulter - keeping the suspense going an ultimate ending. I would recomend this book to anyone who likes murder mysteries.

This is the first Tami Hoag audiobook I've listened to and was very pleased. Lots of twists and turns. Strong characters. The reader did a nice job too. If her other books are as good as this one I have definitely found a new author to keep track of.

This is my second book by this author. I really enjoyed this book. It had so many plot twists and turns that you really couldn't figure it out until the very end. Character depth was great and the pace stays at a steady to fast rate throughout.

Fantastic. Quick moving with bends around every corner!

I don't usually care for this genre of fiction, but this one was great listening while on my daily commute. It was fast-paced, and held my interest better than most. Great character development in addition to action, mystery and suspense. A few times I had to sit in the driveway until some chapter was done.

Great storyline and good characters. Author did a good job of weaving 3 storylines into one.

I did not enjoy this book. All of the characters were either unlikeable or moronic and given to emotional outbursts and irrational behaviour. This was especially true of the 'heroes' of the work. The outcome was predictable. The reader did little to distinguish one character's voice from another, so the story plodded along. I won't be reading anything else by Tami Hoag.

This title is due for release on March 21, 2006
We'll send you an email as soon as it is available!