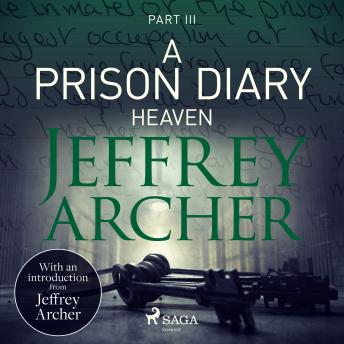 A flicker of light almost appears at the end of the tunnel for prisoner FF8282, as he is transferred to North Sea Camp near Boston, Lincolnshire, a D-category prison. Under a less strict regime, the prisoners can enjoy a more relaxed set of rules, while slowly preparing to someday rejoin the world outside the walls. However, a minor breach of conditions gets him sent off to the notorious HMP Lincoln facility for twenty-two days, where more traumatic experiences await.

'Heaven' is the third book in Jeffrey Archer's bestselling series The Prison Diaries. In this final volume Archer reflects on his time spent in prison, leading up to his release on parole in July 2003.

An eye-opening insight into prison life, exploring the humanity to be found behind bars, while simultaneously highlighting a system failing society as a whole and as individuals, where inmates leave worse off and more dangerous than when they first entered.

-
Jeffrey Archer is a bestselling British author and former politician. He was educated at Oxford and went on to become a Member of Parliament, the deputy chair of the Conservative Party as well as sitting in the House of Lords. His political career ended in scandal and he turned to writing and he has been published in over 275 million copies worldwide.

He is perhaps most famous for the 'Clifton Chronicles' and his blockbuster 'Kane and Abel' which was number one on the New York Time's Bestseller list and inspired a popular miniseries starring Peter Strauss and Sam Neill.

After he was imprisoned for perjury in 2001, he wrote his highly acclaimed non-fiction series, Prison Diaries - 'Hell', 'Purgatory' and 'Heaven' - which were inspired by his experiences and loosely structured around Dante's Divine Comedy.