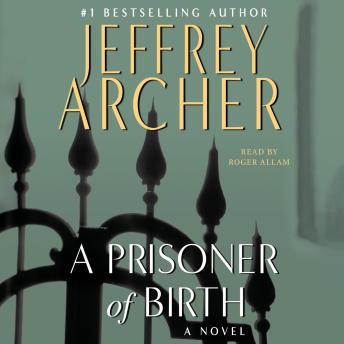 A Prisoner of Birth: A Novel

International bestseller and master storyteller Jeffrey Archer returns with a tale of fate and fortune, redemption and revenge with A Prisoner of Birth.

Danny Cartwright and Spencer Craig never should have met. One evening, Danny, an East End cockney who works as a garage mechanic, takes his fianceé up to the West End to celebrate their engagement. He crosses the path of Spencer Craig, a West End barrister posed to be the youngest Queen's Counsel of his generation.

A few hours later Danny is arrested for murder and later is sentenced to twenty-two years in prison, thanks to irrefutable testimony from Spencer, the prosecution's main witness.

Danny spends the next few years in a high-security prison while Spencer Craig's career as a lawyer goes straight up. All the while Danny plans to escape and wreak his revenge.

Thus begins Jeffrey Archer's poignant novel of deception, hatred and vengeance, in which only one of them can finally triumph while the other will spend the rest of his days in jail. But which one will triumph? This suspenseful novel takes the listener through so many twists and turns that no one will guess the ending, even the most ardent of Archer's many, many fans.

Extremely well written. You will not see the twist and turns the author takes you trough in this tale. Definitely will remain in my library.

A great book from beginning to end and one that I looked forward to listening to on my commute every day. Would highly recommend to anyone that likes drama, murder / mysteries, legal thrillers, etc.

This was a long, wonderful story I would recommend to anyone without reservation. The characters are well written and the narrator does a good job keeping up with all the nuances in each one. It is a long book, but very enjoyable as it unfolds. It will remain one of my very favorites.

Great book, very attractive from beginning to end. Elegant writing and dialog - especially in court. I love it!

This tale was supremely entertaining! I was sorry for it to end. I loved the variety of characters and the twists of the plot. The many Britishisms were a plus.

This title is due for release on March 4, 2008
We'll send you an email as soon as it is available!