A Protector in the Highlands 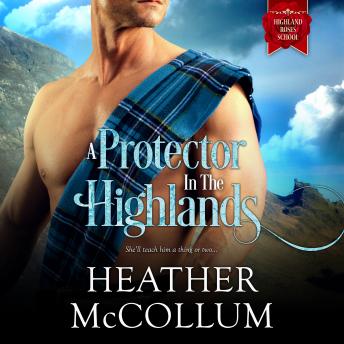 With few other options, Scarlet Worthington flees from her home in England to the wild Highlands of Scotland to help her sister run a school for ladies. There, Scarlet begins to rebuild her own shattered confidence by recruiting a fierce Campbell warrior to teach her and the students how to protect themselves from villains and scoundrels. The intimidating Aiden Campbell both infuriates Scarlet and ignites a fire inside her as she works closely with him to hone her new skills.
Burned in a fierce fire, set by English soldiers, Highland warrior, Aiden Campbell, has finally healed enough to take temporary command of his clan. That's where his focus should be instead of dealing with the feisty, beautiful Sassenach who asks him to teach her students.
When Scarlet's past stalks her up into Scotland, her nightmares come alive, and Aiden's lessons are put to the test. With his own ghosts from the past making him despise English women, Aiden fights the inferno of passion that's grown between them, a different kind of wild fire that could prove just as deadly.

Protector in the Highlands