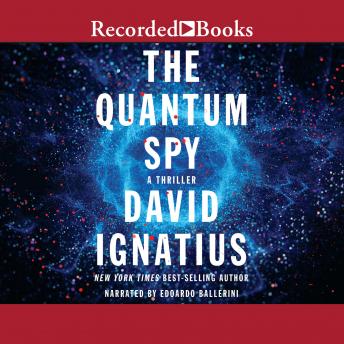 The race to build the first quantum computer heats up in the newest high-tech spy thriller from best-selling author David Ignatius. A hyper-fast quantum computer is the digital equivalent of a nuclear bomb: whoever possesses one will be able to shred any encryption in existence, effectively owning the digital world. The question is: Who will build it first, the United States or China? The latest of David Ignatius's timely, sharp-eyed espionage novels follows CIA agent Harris Chang into a quantum research lab compromised by a suspected Chinese informant. The breach provokes a mole hunt that is obsessive, destructive, and-above all-uncertain: Do the leaks expose real secrets, or are they false trails meant to deceive the Chinese? Chang soon finds that there is a thin line between loyalty and betrayal, as the investigation leads him down a rabbit hole as dangerous as it is deep. Grounded in the real-world global charge toward technological dominance, The Quantum Spy presents a sophisticated game of cat-and-mouse wired to an exhilarating cyber thriller.