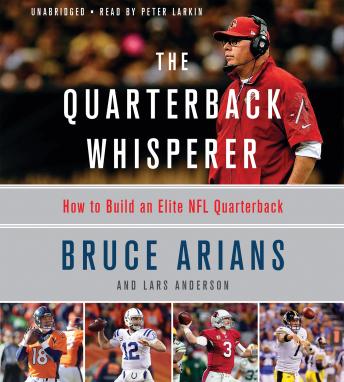 What is an elite NFL QB and what separates that player from the others? One answer is the coach they share. In the recent history of the biggest game on earth, one man is the common thread that connects several of the very best in the sport: Peyton Manning; Ben Roethlisberger; Andrew Luck; and the resurgent Carson Palmer. That coach is Bruce Arians.

A larger than life visionary who trained under the tutelage of Bear Bryant, Arians has had a major impact on the development and success of each of these players. For proof beyond the stats, go to the sources.

'Bruce is gonna love you when you need some loving, but he's gonna jump on you when you're not doing right.' -- Peyton Manning

'He coaches the way players want to be coached.' -- Ben Roethlisberger

'He made players comfortable around him and let everybody have their own personality. He didn't force anybody to be someone they weren't. It may sound a little corny or cheesy, but there's merit to that. I felt comfortable being myself and I felt he had my back.' -- Andrew Luck

'We're a resilient group. It trickles down from the head coach. I think good teams, really good teams, and hopefully great teams take on their coach's mentality. I think that's what B.A. brings . . . ' -- Carson Palmer

Known around the game as the 'quarterback whisperer', Arians has an uncanny ability to both personally connect with his quarterbacks and to locate what the individual triggers are for that player to succeed. No two quarterbacks are the same. And yet with Arians they always share success. In this book Arians will explain how he does it.

Quarterback Whisperer: How to Build an Elite NFL Quarterback