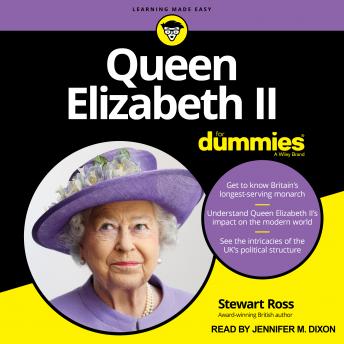 If the news about Harry, William, Kate, Meghan, and the rest of the British royals has you wondering about how this latest generation of princes, princesses, dukes, and duchesses got their start, you're not alone. Queen Elizabeth II For Dummies takes you on a fascinating journey through the life of Great Britain's longest-serving monarch.

You'll find revealing stories about Queen Elizabeth II's family background, her childhood, early ascension to the throne, and her role during times of national crisis and triumph. The book combines must-know facts about the monarchy with details of the remarkable woman who has held the crown for over sixty-eight years (and counting). You'll also learn about: where shows like The Crown stay true-to-life and where they take artistic liberties with historical fact; Queen Elizabeth II's relationship with Prince Charles, the late Prince Phillip, Princess Diana, and the thousands of famous figures she has encountered during her reign; and the subtle and at times controversial role of a hereditary Head of State in a democracy. A must-listen full of trivia, secrets, and history, Queen Elizabeth II For Dummies is perfect for anyone with an interest in the monarchy, British governance, power and society, leadership, or the resurgence of the British monarchy in popular culture.

This title is due for release on July 19, 2022
We'll send you an email as soon as it is available!