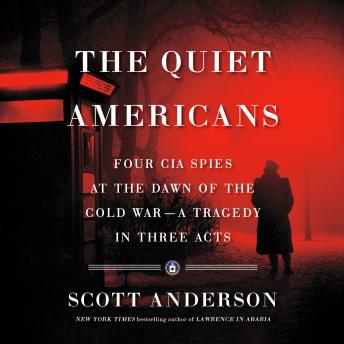 The Quiet Americans: Four CIA Spies at the Dawn of the Cold War--a Tragedy in Three Acts

From the bestselling author of Lawrence in Arabia—the gripping story of four CIA agents during the early days of the Cold War—and how the United States, at the very pinnacle of its power, managed to permanently damage its moral standing in the world.

At the end of World War II, the United States was considered the victor over tyranny and a champion of freedom. But it was clear—to some—that the Soviet Union was already seeking to expand and foment revolution around the world, and the American government’s strategy in response relied on the secret efforts of a newly formed CIA. Chronicling the fascinating lives of four agents, Scott Anderson follows the exploits of four spies: Michael Burke, who organized parachute commandos from an Italian villa; Frank Wisner, an ingenious spymaster who directed actions around the world; Peter Sichel, a German Jew who outwitted the ruthless KGB in Berlin; and Edward Lansdale, a mastermind of psychological warfare in the Far East. But despite their lofty ambitions, time and again their efforts went awry, thwarted by a combination of ham-fisted politicking and ideological rigidity at the highest levels of the government.