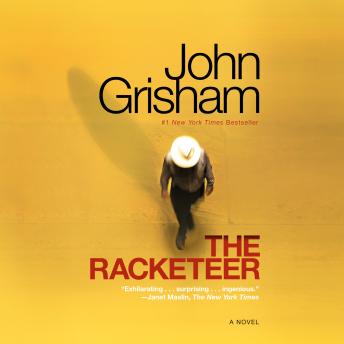 #1 NEW YORK TIMES BEST SELLER • “The Racketeer is guilty of only one thing: keeping us engaged until the very last page.”—USA Today • In the history of the United States, only four active federal judges have been murdered. Judge Raymond Fawcett has just become number five.

His body is found in his remote lakeside cabin. There is no sign of forced entry or struggle. Just two dead bodies: Judge Fawcett and his young secretary. And one large, state-of-the-art, extremely secure safe, opened and emptied.

Who is the Racketeer? And what does he have to do with the judge’s untimely demise? His name, for the moment, is Malcolm Bannister. Job status? Former attorney. Current residence? The Federal Prison Camp near Frostburg, Maryland.

On paper, Malcolm’s situation isn’t looking too good these days, but he’s got an ace up his sleeve. He knows who killed Judge Fawcett, and he knows why. The FBI would love to know. And Malcolm Bannister would love to tell them. But everything has a price—especially information as explosive as the sequence of events that led to Judge Fawcett’s death. And the Racketeer wasn’t born yesterday.

Nothing is as it seems and everything’s fair game in this wickedly clever novel from John Grisham, the undisputed master of the legal thriller.

The Racketeer was full of twists and turns. Although I guessed the final twist, I stayed interested. It required a bit of a stretch to accept the stunts that are pulled could actually be accomplished. But that's why it's fiction ...

Loved the book. Story was absorbing and characters were interesting. A fun fiction.

Great story, a little less intricate than most Grisham novels but I may be spoiled after "The Reconing

If you enjoy Grisham novels, you’ll enjoy this one too! I devoured this one as usual.

Great story; fine presentation. Story line reminds me of Breaking Bad and how life circumstances can change a person's perspective.

The story was great. Grabbed my attention from the start. Great narration. Very soothing to listen to.

The story was interesting with some surprises. The narrator was well suited for the novel’s characters. Fun read.

Not the best Grishom book. His earlier books were a lot better.

This title is due for release on October 23, 2012
We'll send you an email as soon as it is available!