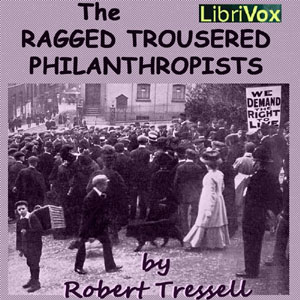 Clearly frustrated at the refusal of his contemporaries to recognise the iniquity of society, Tressell's cast of hypocritical Christians, exploitative capitalists and corrupt councillors provide a backdrop for his main target - the workers who think that a better life is "not for the likes of them". Hence the title of the book; Tressell paints the workers as "philanthropists" who throw themselves into back-breaking work for poverty wages in order to generate profit for their masters.

The hero of the book, Frank Owen, is a socialist who believes that the capitalist system is the real source of the poverty he sees all around him. In vain he tries to convince his fellow workers of his world view, but finds that their education has trained them to distrust their own thoughts and to rely on those of their "betters". Much of the book consists of conversations between Owen and the others, or more often of lectures by Owen in the face of their jeering; this was presumably based on Tressell's own experiences.(Summary by Tadhg)