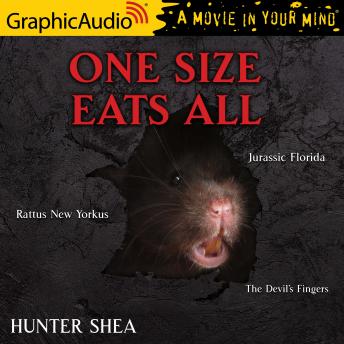 #1 of One Size Eats All (Dramatized Adaptation)

THEY'RE BIGGER AND SMARTER
Deep in the sewers of New York City, the rat population is growing. Dr. Randolph Finch is determined to break the cycle. His new rodenticide, Degenesis, doesn't kill rats. It sterilizes them from reproducing. But nothing adapts faster than a New York rat . . . City exterminators and soon-to-be divorced Chris and Benita Jackson think they know how these rats think. They know how rats breed. And they fear that Degenesis has only made these rats stronger. More aggressive. More intelligent. And more ravenous than ever . . . After a noticeable surge in rat den activity, the Jacksons witness something strange. Without warning, the rats disappear—only to reassemble in a massive lair beneath Grand Central Station. Millions upon millions of them. Working together. Operating as a hive mind. Feasting on the flesh of the homeless below—and planning their all-out attack on the unsuspecting humans above . . .

FLORIDA. IT'S WHERE YOU GO TO DIE.
Welcome to Polo Springs, a sleepy little town on Florida's Gulf Coast. It's a great place to live—if you don't mind the hurricanes. Or the flooding. Or the unusual wildlife . . . Maybe it's the weather. But the whole town is overrun with the little green iguana bastards this year. They're causing a lot of damage. They're eating everything in sight. And they're just the babies . . . The mayor wants to address the iguana problem. But when Hurricane Ramona slams the coast, the town has a bigger problem on their hands. Bigger iguanas. Bigger than a double-wide. Unleashed by the storm, this razor-toothed horde of prehistoric predators rises up from the depths—and descends on the town like retirees at an early bird special. Except humans are on the menu. And it's all you can eat . . .

WHAT HAS LONG PINK FINGERS AND SMELLS LIKE ROTTING FLESH?
It is a slime-covered fungus known for its pinkish red tentacles and pungent odor. It is indigenous to Australia but has spread to North America. Its Latin name is Clathrus Archeri, also known as Octopus Stinkhorn. Most people call it The Devil's Fingers . . . Deep in the woods of Washington, botanist Autumn Winters stumbles onto a field of the luridly colored fungi. Two of her fellow campers make the mistake of touching it. Now it's growing on them. Fleshy gelatinous pods. Sprouting from their skin. Feeding on their blood . . . Autumn watches in horror as her friends are transformed into monstrosities—grotesque, human-fungal hybrids as contagious and deadly as any virus. Autumn knows she must destroy these mutations before they return to civilization. But if there's one thing that spreads faster than fear, it's The Devil's Fingers . . .

This title is due for release on June 4, 2020
We'll send you an email as soon as it is available!