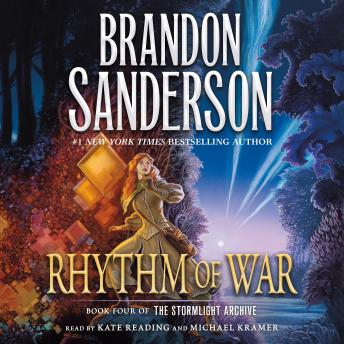 The Rhythm of War: Book Four of The Stormlight Archive

#4 of The Stormlight Archive

An instant #1 New York Times Bestseller and a USA Today and Indie Bestseller!

The Stormlight Archive saga continues in Rhythm of War, the eagerly awaited sequel to Brandon Sanderson's #1 New York Times bestselling Oathbringer, from an epic fantasy writer at the top of his game.

After forming a coalition of human resistance against the enemy invasion, Dalinar Kholin and his Knights Radiant have spent a year fighting a protracted, brutal war. Neither side has gained an advantage, and the threat of a betrayal by Dalinar’s crafty ally Taravangian looms over every strategic move.

Now, as new technological discoveries by Navani Kholin’s scholars begin to change the face of the war, the enemy prepares a bold and dangerous operation. The arms race that follows will challenge the very core of the Radiant ideals, and potentially reveal the secrets of the ancient tower that was once the heart of their strength.

At the same time that Kaladin Stormblessed must come to grips with his changing role within the Knights Radiant, his Windrunners face their own problem: As more and more deadly enemy Fused awaken to wage war, no more honorspren are willing to bond with humans to increase the number of Radiants. Adolin and Shallan must lead the coalition’s envoy to the honorspren stronghold of Lasting Integrity and either convince the spren to join the cause against the evil god Odium, or personally face the storm of failure.

In my opinion this book was impeccably written with excellent build on emotional character development and an amazing evolution of the character dynamics. I find myself feeling more connected to the characters and the motivations that drive them.

these books are amazing

Hugh fan of the Storm light Archives. Each book is an excellent read. Sanderson is easily becoming my favorite author. The narrators of this series are by far the best I've heard. I mainly read fantasy and sci-fi novels and Sanderson's stories are fantastic.

I have thoroughly enjoyed this series and am looking forward to book 5.

Brandon can still pull of the big twists that shock you, even as it makes so much sense that you feel you should have realized it all sooner. The narration is still outstanding from Michael and Kate.

i have read every Sanderson book except legion. I'm not sure what convinced him to moronically insert a spreading pandemic and some propaganda about covering your face into this book clearly added at the last minute. also it's really hard to listen to listen to the female narrator read some of the male characrers, especially adolin. he sounds like he has a learning disability

Favorite series of all time

my favorite series to date. sanderson is a creative genius

I was rattled by most of the build up and hot damn I am ready for book 5!

Well I suffered through this book up to the last 9 hours. Then the book became interesting. Many jumps of character stories. All blended back in. The last 20 30 min was not to my interest. Good intro to next book. Not sure I can do this again. My limit is 3 books. I am lucky I got through all of these. Will have to wait and see As always the narrators were awesome.

This is a 60 hr listen..... and at the end I was begging for more! Every fantasy fan must read this series. It's absolutely amazing!

It just came out and I can’t wait until the next one! Not gonna lie, this one made me cry.

I can't get enough of The Stormlight books. Rythm of War was long awaited and I loved every bit of it!!! MORE PLEASE!!!