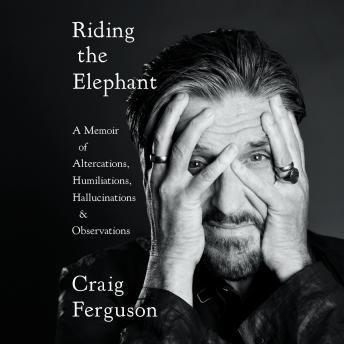 Riding the Elephant: A Memoir of Altercations, Humiliations, Hallucinations, and Observations

From the comedian, actor, and former host of The Late Late Show comes an irreverent, lyrical memoir in essays featuring his signature wit.

Craig Ferguson has defied the odds his entire life. He has failed when he should have succeeded and succeeded when he should have failed. The fact that he is neither dead nor in a locked facility (at the time of printing) is something of a miracle in itself. In Craig’s candid and revealing memoir, listeners will get a look into the mind and recollections of the unique and twisted Scottish American who became a national hero for pioneering the world’s first TV robot skeleton sidekick and reviving two dudes in a horse suit dancing as a form of entertainment.

In Riding the Elephant, there are some stories that are too graphic for television, too politically incorrect for social media, or too meditative for a stand-up comedy performance. Craig discusses his deep love for his native Scotland, examines his profound psychic change brought on by fatherhood, and looks at aging and mortality with a perspective that he was incapable of as a younger man. Each story is strung together in a colorful tapestry that ultimately reveals a complicated man who has learned to process—and even enjoy—the unusual trajectory of his life.

Enjoyed listening to Craig Ferguson telling how and why he is where he is.

One cannot help compare this to "American on purpose" Also read by the author himself. By itself it's a peek into an American tv-personality. Stories from a sober alcoholic. A workaholic. A father. Fergusons first memoir seems a bit rosy. This is somewhat more raw. There's love in here for his family, but there's also more than one F.U. to the haters. You get a sense of grandpa telling stories by the fire, and grandpa swears. and that's really quite allright..

Its Craig saying stories. Its not as solid as his autobiography. It feels more like train of thoughts while he is telling stories from his life. I love Craig so I love the book. But I don't have the hunger to finish it that I had for his autobiography. Still a good read :)