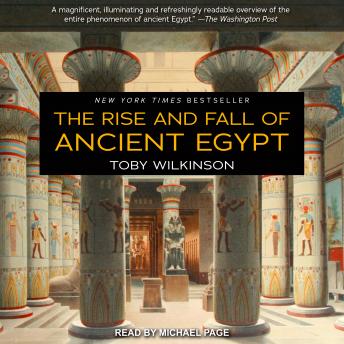 The Rise and Fall of Ancient Egypt

In this landmark work, one of the world's most renowned Egyptologists tells the epic story of this great civilization, from its birth as the first nation-state to its final absorption into the Roman Empire-three thousand years of wild drama, bold spectacle, and unforgettable characters.

Award-winning scholar Toby Wilkinson captures not only the lavish pomp and artistic grandeur of this land of pyramids and pharaohs but for the first time reveals the constant propaganda and repression that were its foundations. Drawing upon forty years of archaeological research, Wilkinson takes us inside an exotic tribal society with a pre-monetary economy and decadent, divine kings who ruled with all-too-recognizable human emotions.

Riveting and revelatory, filled with new information and unique interpretations, The Rise and Fall of Ancient Egypt will become the standard source about this great civilization, one that lasted-so far-longer than any other.