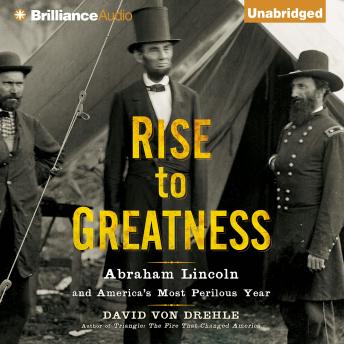 Rise to Greatness: Abraham Lincoln and America's Most Perilous Year

As 1862 dawned, the American republic was at death’s door. The federal government appeared overwhelmed, the U.S. Treasury was broke, and the Union’s top general was gravely ill. The Confederacy—with its booming economy, expert military leadership, and commanding position on the battlefield—had a clear view to victory. To a remarkable extent, the survival of the country depended on the judgment, cunning, and resilience of the unschooled frontier lawyer who had recently been elected president.Twelve months later, the Civil War had become a cataclysm but the tide had turned. The Union generals who would win the war had at last emerged, and the Confederate army had suffered the key losses that would lead to its doom. The blueprint for modern America—an expanding colossus of industrial and financial might—had been indelibly inked. And the man who brought the nation through its darkest hour, Abraham Lincoln, had signed the Emancipation Proclamation and emerged as a singular leader.In Rise to Greatness, acclaimed author David Von Drehle has created both a deeply human portrait of America’s greatest president and a rich, dramatic narrative about our most fateful year.

Fascinating book! This covers only a short period of Lincoln's life, but you get an amazing sense of who he was and how he lead. The author places you in the room and in Lincoln's mind with all the excellent research that was put into writing this book. This was my first book on Lincoln and I have read several others since then ( I was inspired to learn more about him after reading this book) but this is by far the best one I've read.

1862 was an extraordinary political, social and military year and David Von Dehle's Rise to Greatness exhaustively includes all. The narrator's voice grasped the gravity of the events. His Lincoln voice, always distinguishable, was chilling. The events of that year were expounded upon with such authoritative detail that at times you could get lost in the maze of names and connections. Always though there was a significant summation, and the next month arrived with a new chapter. Outstanding production and even better history.

My first "read" via audiobooks: A most enjoyable and informative book...really peaked my interest for further reading. Great narration I'm now "reading"/listening to Team of Rivals....this book has provided a great background that makes Team of Rivals better understood and appreciated.