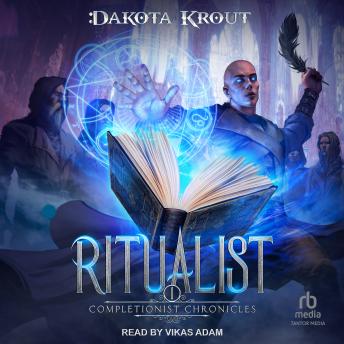 The decision to start a new life is never an easy one, but for Joe the transition was far from figurative. Becoming a permanent addition to a game world, it doesn't take long to learn that people with his abilities are actively hunted. In fact, if the wrong people gained knowledge of what he was capable of, assassins would appear in droves.

In his pursuit of power, Joe fights alongside his team, completes quests, and delves into the mysteries of his class, which he quickly discovers can only be practiced in secret. Ultimately, his goal is to complete every mission, master every ability, and learn all of the world's secrets. All he has to do is survive long enough to make that happen.

This book is absolutely fantastic! A very good dungeons and dragons game feel to it. incredibly rich and imaginative. I've never been actually addicted to a book before, but I honestly wanted to be reading anytime I wasn't reading this! 10/10 good read. I also love the character voices, especially the female lead.

More for young readers than adults, and if your not into role playing games, this probably isn’t your thing.

Woohooo pleasantly surprised to find out this book is the continuation of Dungeon Born.

Fun read, though sometimes the author's apparent right wing leanings come through. Considering how often SciFi/Fantasy writers are left wing and do the same though, I suppose that's only fair. The narrator is great except for his female voices. They are extremely grating and obnoxious.

Entertainment is good and very easy to follow story is fairly simple maybe to simple but satisfying to read a video game in auto mode if you into something like it. Perfect for backround listining you will not need full attention for this one and get into the World of RPGs while having time to work on real world project...

A fun and enjoyable gaming book. I love listening.

Warning, you might suffer some huge eyerolls when you encounter some later boogie men, with regard to this universe's government and college and the regulations therein. Lot of sophomoric "regulations exist to coddle weak men" nonsense from the protagonist. Well, it is a universe series of books featuring a "president musk", so you know. Book is a passing power fantasy outside of these weird rants.

Was a awesome to listen too. Very happy hope they have a lot more an longer!!!