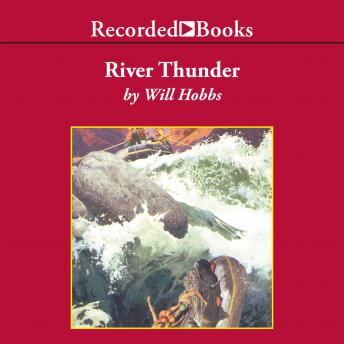 Jessie and the gang are reunited for a second heart-pounding whitewater ride through the Grand Canyon. The teens are thrilled to have another go at the Colorado together-especially Jessie, who will get to pilot a raft this time. But when they find out that the infamous ringleader Troy is behind the reunion trip, tempers flare. Troy says he wants the chance to redeem himself, but Jessie suspects his motives. Nonetheless, and even as the water rises to record levels, the river calls Jessie and the others to embark on another life-or-death adventure. Between the thundering water and the intense emotions it unleashes, the river itself will provide the ultimate test. Downriver won praise from readers across the country as well as many awards. With River Thunder, Hobbs draws from his own whitewater experience to craft another riveting wilderness adventure full of lifelike detail. With Christina Moore's dramatic narration, you will hear the river thunder and shiver with excitement right along with Jessie and her friends.

This title is due for release on March 8, 2013
We'll send you an email as soon as it is available!