The Road to Eleusis: Unveiling the Secret of the Mysteries 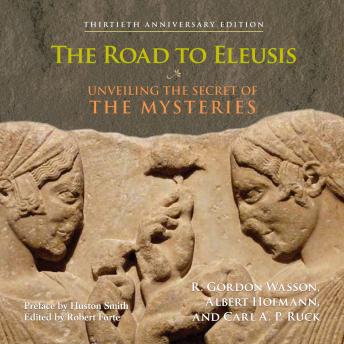 The secretive Mysteries conducted at Eleusis in Greece for nearly two millennia have long puzzled scholars with strange accounts of initiates experiencing otherworldly journeys. In this groundbreaking work, three experts-a mycologist, a chemist, and a historian-argue persuasively that the sacred potion given to participants in the course of the ritual contained a psychoactive entheogen. The authors then expand the discussion to show that natural psychedelic agents have been used in spiritual rituals across history and cultures. Although controversial when first published in 1978, the book's hypothesis has become more widely accepted in recent years, as knowledge of ethnobotany has deepened. The authors have played critical roles in the modern rediscovery of entheogens, and The Road to Eleusis presents an authoritative exposition of their views. The book's themes of the universality of experiential religion, the suppression of that knowledge by exploitative forces, and the use of psychedelics to reconcile the human and natural worlds make it a fascinating and timely listen. This 30th anniversary edition includes an appreciative preface by religious scholar Huston Smith and an updated exploration of the chemical evidence by Peter Webster.

Road to Eleusis: Unveiling the Secret of the Mysteries