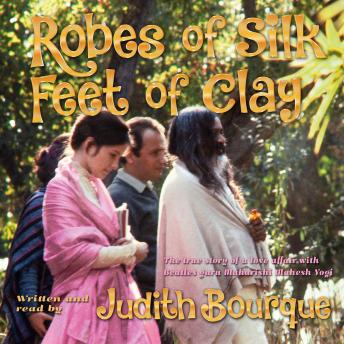 Robes of Silk Feet of Clay: The True Story of a Love Affair with Beatles Guru Maharishi Mahesh Yogi

Maharishi Mahesh Yogi was the charismatic leader of the Transcendental Meditation movement and known internationally as the Beatles’ guru. After John Lennon and George Harrison suddenly left Maharishi’s India ashram retreat in 1968, rumors have persisted that the spiritual leader made advances toward young women which overstepped the boundaries expected of a celibate Hindu monk. In disillusionment, Lennon concluded his stay at the ashram by writing “Sexy Sadie.” He wanted to use Maharishi’s name, but changed the title of the song at George Harrison’s request.

Robes of Silk Feet of Clay reveals the true story of a young woman’s love affair with the powerful guru. Just out of college, Judith Bourque went to India to become a teacher of Transcendental Meditation (TM). “I expected to have a deeply profound spiritual experience with a living prophet … what I got was a decidedly human one!” Maharishi told her not to tell anyone about their relationship, and she didn’t … not until he died in 2008. Judith first came out of the closet in David Sieveking’s David Wants to Fly, a full-length film documenting the German filmmaker’s experiences in learning TM. “After that interview I felt I needed to share the whole story of my relationship with Maharishi in my own way, and finally decided to write my book.”

Robes of Silk Feet of Clay: The True Story of a Love Affair with Beatles Guru Maharishi Mahesh Yogi