The Room on Rue Amélie 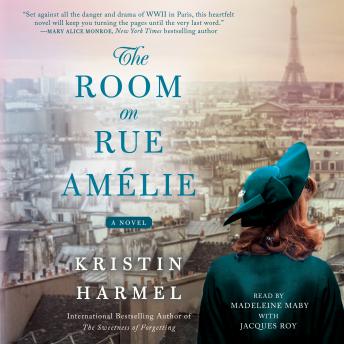 A moving and entrancing novel set in Paris during World War II about an American woman, a dashing pilot, and a young Jewish girl whose fates unexpectedly entwine—perfect for the fans of Kristen Hannah’s The Nightingale and Martha Hall Kelly’s Lilac Girls, this is “an emotional, heart-breaking, inspiring tribute to the strength of the human spirit and the enduring power of love” (Mariah Stewart, New York Times bestselling author).

When Ruby first marries the dashing Frenchman she meets in a coffee shop, she pictures a life strolling arm in arm along French boulevards, awash in the golden afternoon light. But it’s 1938, and war is looming on the horizon.

Unfortunately, her marriage soon grows cold and bitter, her husband Marcel, distant and secretive—all while the Germans flood into Paris, their sinister swastika flags waving in the breeze. When Marcel is killed, Ruby discovers the secret he’d been hiding—he was a member of the French resistance—and now she is determined to take his place.

She becomes involved in hiding Allied soldiers—including a charming RAF pilot—who have landed in enemy territory. But her skills are ultimately put to the test when she begins concealing her twelve-year-old Jewish neighbor, Charlotte, whose family was rounded up by the Gestapo. Ruby and Charlotte become a little family, but as the German net grows tighter around Paris, and the Americans debate entering the combat, the danger increases. No one is safe.

“Set against all the danger and drama of WWII Paris, this heartfelt novel will keep you turning the pages until the very last word” (Mary Alice Monroe, New York Times bestselling author).