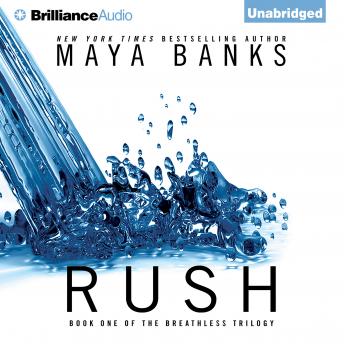 #1 of The Breathless Trilogy

In the first novel in the Breathless trilogy, a man is about to have his fantasies come true with a woman who was once forbidden fruit, and is now ripe for the picking...

When Gabe Hamilton saw Mia Crestwell walk into the ballroom for his hotel’s grand opening, he knew he was going to hell for what he had planned. After all, Mia is his best friend’s little sister. Except she’s not so little anymore. And Gabe has waited a long time to act on his desires.

Gabe has starred in Mia’s fantasies more than once. So what if he’s fourteen years older? Mia knows he’s way out of her league, but her attraction has only grown stronger with time. She’s an adult now, and there’s no reason not to act on her most secret desires.

As Gabe pulls her into his provocative world, she realizes there’s a lot she doesn’t know about him or how exacting his demands can be. Their relationship is intense and obsessive, but as they cross the line from secret sexual odyssey to something deeper, their affair runs the risk of being exposed—and vulnerable to a betrayal far more intimate than either expected.

Unfortunately there was too little plot for my liking. The narrator has a comically unsexy voice and that was incredibly distracting. His story reading wasn't bad, it's just that he was the wrong choice for this novel.

Much too similar to 50 Shades, I was disappointed in that. If it had been different enough, I would have enjoyed it more. I didn't care for the Narration at all however.

Loved this book. Fifty shades done a million times better. Incredible sex scenes. Well written. The ending was shit but the book was so good it was forgivable.

This is a great book. It is both predictable and surprising but you never know which way it will go. The narrator does a very good job giving the characters life, feeling and emotion.

The book was funny and romantic and hot, everything you would want from a novel. I wish they would have a woman narrating though...

Maya Banks has become one of my favorite authors. She definitely exceeded my expectations with this book! I could not put this book down. I could read this book again and again.

I couldn't stop listening once I started. Great book!!

This book is different from "50" . I loved it. When I started it I never put it down til I was done with it. It is so good I could start all over again.