Sadie When She Died 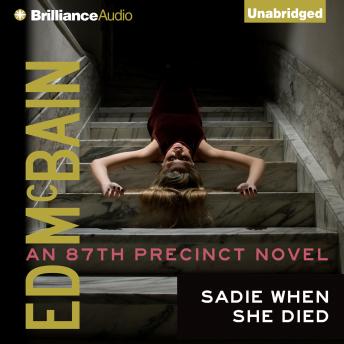 Christmas is coming. But erudite attorney Gerry Fletcher got his present early: his wife’s body with a knife buried in it. Though he shamelessly cops to being happy she’s dead, his alibi is airtight and all signs point to a burglary gone bad. But even when detectives Steve Carella and Bert Kling follow the clues to a junky punk and get a full confession, Carella can’t quit thinking there’s something about the case that’s as phony as a sidewalk Santa’s beard. Maybe it’s because the victim’s husband wants to pal around with the suspicious cop on a cryptic pub-crawl through the urban jungle. Or maybe it’s the dead woman’s double identity and little black book full of secret lovers. Whether she was Sarah the shrewish wife or Sadie the sex-crazy swinger, there’s more to her murder than just a bad case of “wrong place, wrong time.” And Carella won’t rest till his cuffs are on the killer.

Sadie When She Died

This title is due for release on April 1, 2014
We'll send you an email as soon as it is available!