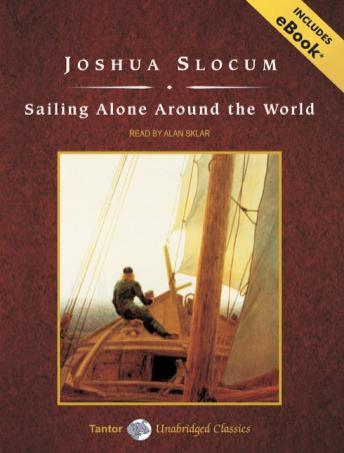 Sailing Alone Around the World

Joshua Slocum is believed to be the first man to sail single-handedly around the world. After a distinguished nautical career, during which he worked his way up from cabin boy to captain, Slocum wrecked his ship off the coast of Brazil. Turning this catastrophe to his advantage, he built a sailing canoe from the wreckage and sailed back to New York. Moreover, he wrote Voyage of the Liberdade, a chronicle of his trip, and earned some literary success. This spurred him to attempt his perilous voyage.

Having lost his fortune in the shipwreck, Slocum began his voyage on a shoestring. He was given the Spray, a century-old oysterboat in need of repairs. Two years and $500 later, he had rebuilt the wreck into an oceangoing wonder.

On his 40,000-mile, three-year voyage, Slocum visited six of the seven continents, where he met cannibals, presidents, outlaws, and ambassadors. Amazingly, throughout his travels he lived off the land, fishing, trading, and giving lectures to keep his pantry full. He also met some remarkable people, including Mrs. Robert Louis Stevenson and Paul Kruger, who, believing the world was flat, warned Slocum not to fall off! This adventure will captivate sailors and landlubbers alike.

One can truly live yourself into the story and even though I've never sailed it is very tempting. Just loved the humour and very educational. Would listen to this one again it was that good. Xxxxx

This title is due for release on March 23, 2009
We'll send you an email as soon as it is available!