The Salem Witch Trials: An Unsolved Mystery from History 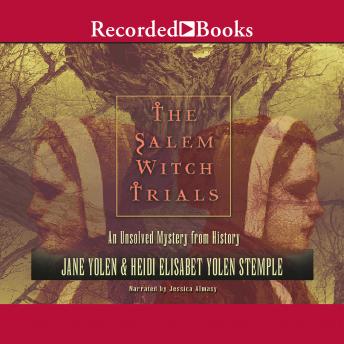 During the long, cold winter of 1692, seven young ladies from Salem, Massachusetts, begin to display disturbing symptoms. They're convulsing, contorting, cowering, and croaking strange sounds. Finding no help from medical books, the village doctor declares them bewitched. Having already triggered more than 60,000 executions in Europe, the fear of witchcraft begins its work-even among sensible, down-to-earth New Englanders. And before it's all over, 141 people are arrested-19 women are hanged, one man is crushed to death, and four others die in jail. But long after the damning 'testimony' of ghosts-seen and heard only by the 'bewitched'-was forever banned from courts, one question remains: What really happened? Jane Yolen-whose hundreds of books have garnered numerous accolades, including Golden Kite and Nebula Awards-teams up with her private detective daughter Heidi Elisabet Yolen Stemple to craft this Oppenheim Toy Portfolio Platinum Award winner. Jessica Almasy's stellar narration adds luster to a baffling episode in U.S. history. 'This [book] effectively introduces an intriguing subject, and the mystery of what really happened is more than enough to whet kids' appetites.'-Booklist 'This is an innovative way to involve young people in the study of history.'-Children's Literature 'The investigative approach . encourages readers to evaluate the evidence .'-Library Journal