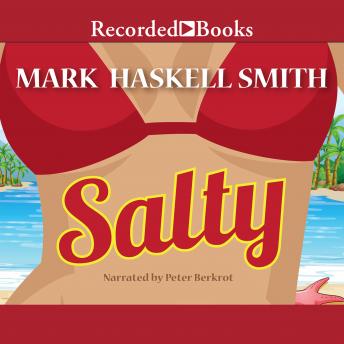 From the author of Moist and Delicious comes a raucous comic novel where anything goes. Turk Henry, an overweight, unemployed rock star married to a supermodel, has discovered that Thailand is probably the last place a recovering sex addict should go on vacation, yet here he is, surrounded by topless groupies and haunted by the stares of hundreds of luscious bar girls. Turk's struggles with monogamy, however, pale beside a greater challenge when his wife is abducted by a group of renegade, shipless Thai pirates. As Turk, whose life skills are limited to playing bass and partying, navigates the back alleys of Bangkok and the deadly jungles of Southeast Asia to save his wife, Salty heats up and sweats bullets. Featuring skinflint American tourists, topless beaches, a hypochondriac U.S. government agent, suitcases loaded with cash, an over-eager full-service personal assistant, a horny Australian commando, inventive prostitutes, and an urbane pirate with a fetish for alabaster skin, this is a hilariously entertaining, thoroughly debauched caper novel - with a happy finish. 'In Carl Hiaasen-like fashion, Smith exuberantly spins out a busy plot loaded with over-the-top characters while taking a few well-aimed potshots at cultural expectations..Absurd, grotesque, and plain fun reading.' -Booklist 'Smith gets the details of mid-level rock stardom just right . mixing laughs and satire like a cross between Carl Hiaasen and Ross Thomas. A-' -Entertainment Weekly 'Graham Greene meets the Marx Brothers and the result is Salty, Mark Haskell Smith's riveting new novel of unquiet Americans on the loose in Thailand. Profane, endearing, and just absurd enough to be totally convincing, Salty is both a comic thriller and a thoughtful meditation on love, lust, and the American way.' -Tom Drury, author of The Driftless Area 'For Turk, saving the day is almost as impossible as staying monogamous. Luckily, being funny comes easily to screenwriter Smith, who writes like Carl Hiaasen, cheerfully skewering Homeland Security, heavy metal, compromised Hollywood morals, American arrogance, fetishes and anything else worth taking a shot at, i.e. . everything. Through it all, Turk rocks on. Smith just plain rocks.' -Miami Herald '[Mark Haskell Smith's] characters include a not-so-usual suspect lineup of hustlers, sex addicts, supermodels, failed rock stars, wine-buff cops, psychos and flakes. Haskell Smith writes well, especially about sex and food, and the multilayered plots move so fast they feel fresh. Think Elmore Leonard meets Mario Batali.' -Richard Rayner, Los Angeles Times 'There is one word for this farce about a fat alcoholic rock star whose wife is kidnapped by Thai pirates: vulgar.. On further thought, a couple of other words describe this book - colorful, satirical, and hilarious!' --Library Journal 'Smith alternates spoofy, lush travel-writer prose with dead-on dialogue and jibes at the lives of

This title is due for release on December 25, 2015
We'll send you an email as soon as it is available!