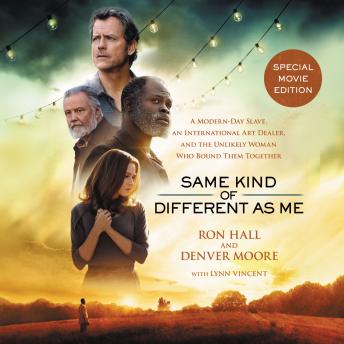 Same Kind of Different As Me Movie Edition: A Modern-Day Slave, an International Art Dealer, and the Unlikely Woman Who Bound Them Together

Listen to the critically acclaimed #1 New York Times best-seller with more than one million copies sold. Same Kind of Different as Me was a major motion picture release by Paramount in fall 2017.

A dangerous, homeless drifter who grew up picking cotton in virtual slavery.

An upscale art dealer accustomed to the world of Armani and Chanel.

A gutsy woman with a stubborn dream.

A story so incredible no novelist would dare dream it.

It begins outside a burning plantation hut in Louisiana . . . and an East Texas honky-tonk . . . and, without a doubt, inside the heart of God. It unfolds at a Hollywood hacienda . . . an upscale New York gallery . . . a downtown dumpster . . . a Texas ranch.

Gritty with betrayal, pain, and brutality, it also shines with an unexpected, life-changing love.


- a new epilogue with updates on the authors since the release of the original book;


- the amazing story behind the movie, how it got made, and the incredible experiences while filming in Jackson, MS

Same Kind of Different As Me Movie Edition: A Modern-Day Slave, an International Art Dealer, and the Unlikely Woman Who Bound Them Together

This title is due for release on September 19, 2017
We'll send you an email as soon as it is available!