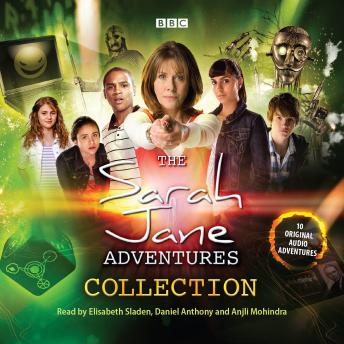 Ten thrilling adventures for Sarah Jane and her friends, as seen on TV, read by Elisabeth Sladen, Daniel Anthony and Anjli Mohindra.

Sarah Jane Smith always finds herself in trouble. As an old friend of the Doctor she's used to encountering aliens, battling monsters and defeating evil. Along with her friends Luke, Clyde, Rani, Maria and Sky - not to mention supercomputer Mr Smith - Sarah Jane and her trusty lipstick are prepared for anything the universe throws at them.

In these amazing stories Sarah Jane finds herself investigating a private health clinic, a mysterious stone circle, some lethal alien artefacts, a strange Victorian house and a bizarre hill-carving. Then there's the camping trip that sees the friends stranded in Snowdonia, the deadly computer virus, the terrifying creatures from a world of nightmares, the steam-powered robot, and the race of aliens who think Sarah Jane is a dangerous law-breaker...

Specially written for audio, eight of the stories are read by Elisabeth Sladen (Sarah Jane), one by Daniel Anthony (Clyde) and one by Anjli Mohindra (Rani).

This title is due for release on March 5, 2020
We'll send you an email as soon as it is available!