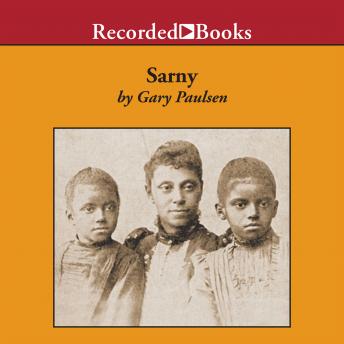 As the Civil War rages around the plantation where Sarny lives, she hears of other slaves running away. They are following the sparkling drinking gourd in the northern sky to freedom. She longs to go wherever she wants and to be allowed to read books, just like the freed slaves. But she has a young son and daughter to look after. When the master sells her children to a stranger, Sarny waits for an opportunity to sneak away to search for them. Her chance comes after a Union soldier kills the master. But is it too late for Sarny to find her family? A turbulent time in America's history bursts colorfully from the pages with award-winning author Gary Paulsen's masterful storytelling. Sarny is his riveting account of an African-American woman's life story from the Civil War days until the early 1930s. Narrator Lynne Thigpen's stunning performance puts you on the scene with Sarny as she builds a new life in the chaotic aftermath of the war. Also available by Gary Paulsen: Nightjohn.

This title is due for release on February 28, 2014
We'll send you an email as soon as it is available!