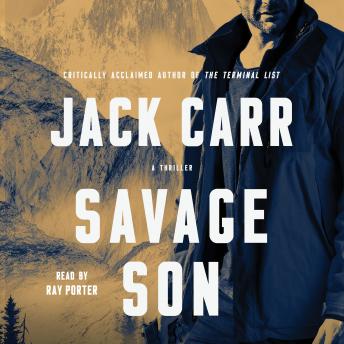 “Take my word for it, James Reece is one rowdy motherf***er. Get ready!”—Chris Pratt, star of The Terminal List, coming soon to Amazon Prime

“A rare gut-punch writer, full of grit and insight, who we will be happily reading for years to come.” —Gregg Hurwitz, New York Times bestselling author of the Orphan X series​

Deep in the wilds of Siberia, a woman is on the run, pursued by a man harboring secrets—a man intent on killing her.

A traitorous CIA officer has found refuge with the Russian mafia with designs on ensuring a certain former Navy SEAL sniper is put in the ground.

Half a world away, James Reece is recovering from brain surgery in the Montana wilderness, slowly putting his life back together with the help of investigative journalist Katie Buranek and his longtime friend and SEAL teammate Raife Hastings. Unbeknownst to them, the Russian mafia has set their sights on Reece in a deadly game of cat and mouse.

As Jack Carr’s most visceral and heart-pounding thriller yet, Savage Son explores the darkest instincts of humanity through the eyes of a man who has seen both the best and the worst of it.

Great book and the narrator was awesome!

Enjoyed the first 3 books and can't wait to listen to the rest!

This was an outstanding book! James Reese is doing what he does best! Full of action and suspense! Keep it coming Jack Carr!!

Nice plot twists and suspense. I love how Jack ties the story together.

Great details and edge of your seat listening all the way through the book!!

Edge of the truck seat listening.

one of the most exciting books I ever heard or read.

I loved the narrator and the way he told the story. He kept me hanging on. I did not want to keep listening when I couldn’t. I will definitely read more of this series.

Book 3 was a satsfying end to some of the last of the bad guys introduced in books 1 and 2.

Yet another solid story. On to his next book!

Entertaining and kept me engaged. A great way to distract the mind on long runs and drives.

Another James Reece novel that was beyond superb. Jack Carr has a tremendous talent for inserting you into the narrative. Easy to imagine every scene while listening to the great Ray Porter narrate.

Interesting twist on the 1930's tale of Russian psycho who hunts humans. Combined with modern Russian mafia vs the CIA.