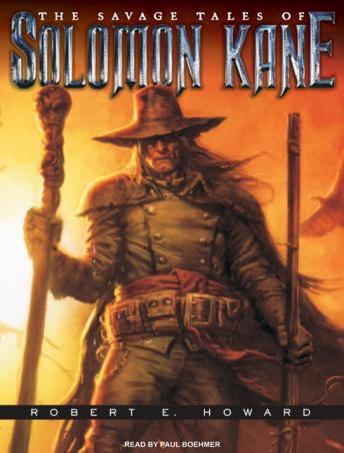 The Savage Tales of Solomon Kane

With Conan the Cimmerian, Robert E. Howard created more than the greatest action hero of the twentieth century-he also launched a genre that came to be known as sword and sorcery. But Conan was not the first archetypal adventurer to spring from Howard's fertile imagination.

He was...a strange blending of Puritan and Cavalier, with a touch of the ancient philosopher, and more than a touch of the pagan.... A hunger in his soul drove him on and on, an urge to right all wrongs, protect all weaker things.... Wayward and restless as the wind, he was consistent in only one respect-he was true to his ideals of justice and right. Such was Solomon Kane.

Collected in this volume are all of the stories that make up the thrilling saga of the dour and deadly Puritan: 'Skulls in the Stars,' 'The Right Hand of Doom,' 'Red Shadows,' 'Rattle of Bones,' 'The Castle of the Devil,' 'Death's Black Riders,' 'The Moon of Skulls,' 'The One Black Stain,' 'The Blue Flame of Vengeance,' 'The Hills of the Dead,' 'Hawk of Basti,' 'The Return of Sir Richard Grenville,' 'Wings in the Night,' 'The Footfalls Within,' 'The Children of Asshur,' and 'Solomon Kane's Homecoming.'

I could not have been more disappointed. It was hard to follow, racial and unentertaining.

Very long time fan of REH and it was a very worth while listen. It was also nice to hear his bio as well, learned a couple of things about him as well.

I'm probably a little prejudiced, as I've been reading these stories and the other Robert E Howard heroes since I was in the 7th grade. The writing is powerful, descriptive and exciting. If you've never read any REH, you are missing a great piece of American writing. The narration done for this audiobook is very good - much better than the free recordings out there on YouTube, and well worth the money. Having Moon of Skulls and Wings in the Night would be worth the money alone, having the other short stories makes it an even better deal

This title is due for release on January 18, 2010
We'll send you an email as soon as it is available!