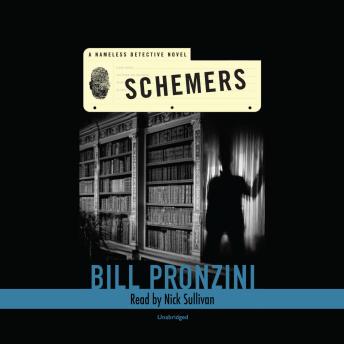 #34 of The Nameless Detective Novels

Nameless wasn't supposed to come into the office on Mondays; he wasn't supposed to answer the phone. On this Monday, he did both. The call was from Barney Rivera—once a friend, now despised—at Great Western Insurance. Against his better judgment, Nameless agreed to meet with him. The investigation was relatively simple: a multimillionaire rare books collector had reported the theft of eight volumes, worth a half million dollars. From a locked library. To which he has the only key. The books were all crime fiction and suspense—a locked-room mystery about mysteries. This ordinary Monday brought a second oddball case: The Henderson brothers were being stalked. Someone had dug up the ashes of their late father and poured acid over them, then destroyed the headstone the same way, and left a sign warning that this was just the beginning. Searching for peace of mind and the distraction of work, Jake Runyon is more than happy to bring an end to the brothers' terror.

This title is due for release on April 1, 2009
We'll send you an email as soon as it is available!