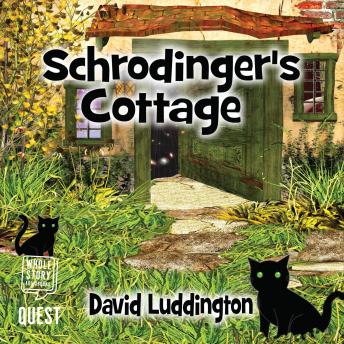 Tinker's Cottage nestles in a forgotten corner of deepest Somerset. It also happens to sit on a weak point in the space time continuum... which is somewhat unfortunate for Ian Faulkener, a graphic novelist from London, who was hoping for some peace and quiet in which to recuperate following a very messy breakdown. It was the cats that first alerted Ian to the fact that something was not quite right with Tinker's Cottage... the cats, and of course the Pope, disappearing literary agents, mislaid handymen and the insanity of Cherie Blair World. As Ian tries to untangle the mystery of the doors of Tinker's cottage he risks becoming lost forever in the myriad alternate universes predicted by Schrodinger. Not to mention his cats. Schrodinger's Cottage is a playful romp through a variety of alternate worlds peopled by an array of wonderful comic characters that are the trademark of David Luddington's novels. For fans of the sadly missed Douglas Adams, Schrodinger's Cottage is a heart-warming comedy with touches of inspired lunacy that pays homage to The Hitchhiker's Guide.

This title is due for release on March 28, 2019
We'll send you an email as soon as it is available!