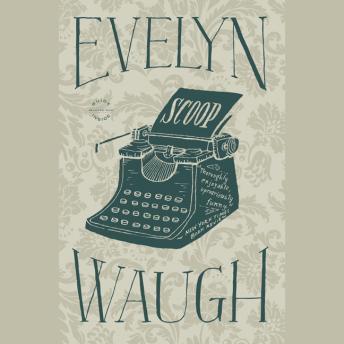 Selected by the Modern Library as one of the 100 best novels of the century, Scoop is a 'thoroughly enjoyable, uproariously funny' satire of the journalism business (New York Times).

Lord Copper, newspaper magnate and proprietor of the Daily Beast, has always prided himself on his intuitive flair for spotting ace reporters. That is not to say he has not made the odd blunder, however, and may in a moment of weakness make another. Acting on a dinner party tip from Mrs. Algernon Stitch, Lord Copper feels convinced that he has hit on just the chap to cover a promising war in the African Republic of Ishmaelia.

So begins Scoop, Waugh's exuberant comedy of mistaken identity and brilliantly irreverent satire of the hectic pursuit of hot news.
'Its timelessness is both hilarious and depressing.' --Seth Meyers

The second funniest of all Waugh's novels, which is saying a lot. The target of his barbed wit in this work is the loathsome press. Waugh knew firsthand how nearly all the press produce Fake News.