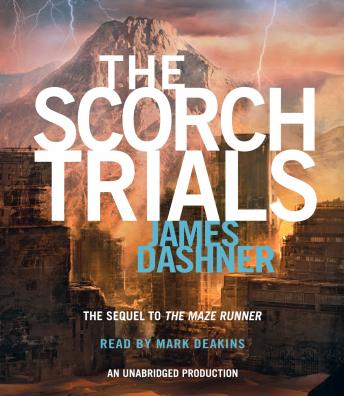 Book two in the blockbuster Maze Runner series that spawned a movie franchise and ushered in a worldwide phenomenon! And don’t miss The Fever Code, the highly-anticipated series conclusion that finally reveals the story of how the maze was built!

Thomas was sure that escape from the Maze would mean freedom for him and the Gladers. But WICKED isn’t done yet. Phase Two has just begun. The Scorch.
The Gladers have two weeks to cross through the Scorch—the most burned-out section of the world. And WICKED has made sure to adjust the variables and stack the odds against them.
There are others now. Their survival depends on the Gladers’ destruction—and they’re determined to survive.
Friendships will be tested. Loyalties will be broken. All bets are off.

“[A] mysterious survival saga that passionate fans describe as a fusion of Lord of the Flies, The Hunger Games, and Lost.” —EW

“James Dashner’s illuminating prequel [The Kill Order] will thrill fans of this Maze Runner [series] and prove just as exciting for readers new to the series.” —Shelf Awareness, Starred

“Take a deep breath before you start any James Dashner book.” —Deseret News

This title is due for release on October 26, 2010
We'll send you an email as soon as it is available!