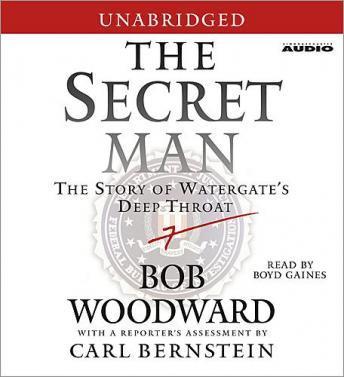 The Secret Man: The Story of Watergate's Deep Throat

In Washington, D.C., where little stays secret for long, the identity of Deep Throat -- the mysterious source who helped Bob Woodward and Carl Bernstein break open the Watergate scandal in 1972 -- remained hidden for 33 years. Now, Woodward tells the story of his long, complex relationship with W. Mark Felt, the enigmatic former No. 2 man in the Federal Bureau of Investigation who helped end the presidency of Richard Nixon.
The Secret Man chronicles the story in intimate detail, from Woodward's first, chance encounter with Felt in the Nixon White House, to their covert, middle-of-the-night meetings in an underground parking garage, to the aftermath of Watergate and decades beyond, until Felt finally stepped forward at age 91 to unmask himself as Deep Throat.
The Secret Man is an intense 33-year journey, providing a one-of-a-kind study of trust, deception, pressures, alliances, doubts and a lifetime of secrets. Woodward has spent more than three decades asking himself why Mark Felt became Deep Throat. Now the world can see what happened and why, bringing to a close one of the last chapters of Watergate.

I had little understanding about Watergate except for the fact that it was important of course. Wow, all I can say is I wish I had looked into this sooner. I still want to do more research and see what else there is on this subject. I found a website that has all the transcripts and audio on it so you can hear for yourself. All you have to do is google Watergate and its the second entry from the top on that page. I'm just so amazed at how vast the entire conspiracy was. The difference between then and now is people at the top are getting away with things far worse and the majority is unwilling to even try to correct the problem through impeachment or other forced resignations.

The Secret Man delves into Bob's relationship with Mark Felt, even before Watergate. He even adds a nugget in some autobiographical information regarding his early career, once he left the Navy. The book goes into depth about his personal struggle regarding just how long must an agreement be kept. I'm glad he kept the secret of Deep Throat as long as he did. It says much about his character. If there were more journalists like Woodward / Bernstein in the the country today, we'd all have much more faith in government and the press. It's a tragedy that there aren't that many journalists with the same drive/integrity in the latest batch of journalists today.

Good follow-up reading to All the Presidents Men, but rambles on at the end and never answers the question, "Why?"

The last missing puzzle piece. The author wove this complicated story from the beginning to the recent disclosure. For those of us who lived during this time and followed its nearly daily unraveling, it is a must. For our children, it is history told by the history maker. Well written, well read.

This title is due for release on July 6, 2005
We'll send you an email as soon as it is available!