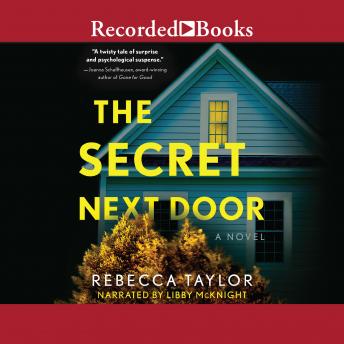 The Secret Next Door

It's the perfect neighborhood, filled with not-so-perfect people.

Alyson Tinsdale is giving her son the childhood she never had: a stable family, a loving home, and a great school in a safe neighborhood. When they move into the home of her dreams in one of Denver’s most sought-after developments, Alyson
works hard to fit in and impress the other mothers.

Bonnie Sloan is the neighborhood matriarch. With her oldest son headed to Yale and her youngest starting kindergarten, Bonnie is now pursuing her own long-held political aspirations. But it’s her middle child, Elijah, and their private family
struggles that cast a shadow over her plans.

When the open space behind some of the most expensive homes gets slated for development into a golf amusement facility, the neighborhood becomes deeply divided. The personal pressures and community conflicts ratchet with every
passing day, but it’s when a thirteen-year-old boy is found dead beside the lake that simmering tensions boil over into panic.

Gossip flows, lies are exposed, and accusations are made as cracks run through the community’s once-solid foundations. The neighborhood’s faith in exterior appearances is eclipsed by the secrets every house keeps.

Rebecca Taylor, author of Her Perfect Life, returns with this fast-paced, engrossing novel that reminds us that nothing is ever as perfect as it seems.

The protagonist is surprisingly dull and a bit annoying at times. The main mystery was never fully explored. I kept forgetting who the different women were because there wasn't anything distinguishing them from each other. I think I may have figured out the "who done it" early in the book, but out of rambling discourse, I forgot about that discovery until the end. It was an okay book. I wouldn't recommend it for a book club reading. But it was a good background story for while I was cleaning the house.

I think I lost 10 hours of my time. Too plain. Didn’t like the ending. I kept waiting for the excitement and it never came. Lackluster…

Please read before purchase, I wished I had a warning to avoid this book. Narater was very good, she just had bad content. I don’t like to waste time. Thank God I was driving. This book went NOWHERE! Lack of character development, caddy women without purpose other than “to poor a large helping of wine” Is this what we as women want to emulate? If your a fan of the “Housewives “ series, enjoy. The last 10 minutes was finally redeeming ( as mentioned in another review)

Not a good story line, everything in the book has nothing to do with anything ..everything was over subscribed with no point at the end, nothing good but the last 10mins