Seeing with the Heart: A Kindred Tales Novel 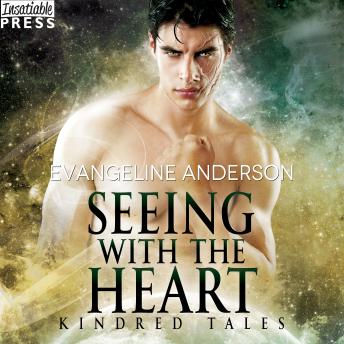 A warrior with a tragic past who has scars on both his face…and his heart
A beautiful woman, blind from the age of sixteen.
When they meet, the attraction is sizzling but when Molly regains her sight, will Braxx turn away from her? Or can she convince him she isn't looking with her eyes…but Seeing with her Heart?

Braxx is a Beast Kindred with a painful past. A traumatic crash stole his brother and his bride from him and left half of his face horribly scarred. Desperate to avoid the pitying and disgusted looks he gets whenever he goes out, he takes a job as a scout, travelling across the universe to find new trade partners and power sources for the Kindred. He thinks he'll never love again until he comes back to Earth and meets Molly.

Dr. Molly Reynaud has a doctorate in Cultural Anthropology. She's also completely blind and has been since a car accident stole both her parents and her sight at the age of sixteen. Chosen to do a field study on the elusive Tal'ossi people from Tal'os Trenta, she doesn’t expect to have feelings for the Kindred warrior who is supposed to guard her there. But she can't seem to help the instant connection she feels to Braxx and she knows he feels the same for her.

But he's scarred on the inside too and he tells himself such a perfect female isn't for him.
Then the unthinkable happens--Molly is kidnapped by the Deep Dwellers of Tal'ossi and taken down to the subterranean depths as a bride for their leader. Braxx must go after her and suddenly the idea of claiming turns from a wish to a necessity.

Can Braxx overcome his tragic past and save the woman he loves? And can Molly convince him they belong together? Both of them will have to practice Seeing with the Heart or they will be parted forever…

Seeing with the Heart: A Kindred Tales Novel

This title is due for release on December 28, 2018
We'll send you an email as soon as it is available!