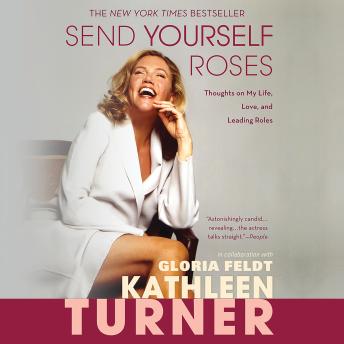 Send Yourself Roses: Thoughts on My Life, Love, and Leading Roles

Kathleen Turner is one of the most admired actresses of her generation, but she's led a very private life. Here is the bestselling candid and humorous account of her personal and professional life--including the truth about her recently-ended marriage, her inspiring recovery from rheumatoid arthritis, and her award-winning return to the stage.

From her film debut as the sultry schemer in Body Heat to her award-winning role as Martha in Who's Afraid of Virginia Woolf?, actress Kathleen Turner's unique blend of beauty, intelligence, and raw sexuality has driven her personal and professional life. Now, in this gutsy memoir, the screen icon tells us of the risks she's taken and the lessons she's learned-sometimes the hard way.

For the first time, Turner shares her childhood challenges-a life lived in countries around the world until her father, a State Department official whom she so admired, died suddenly when she was a teenager. She talks about her twenty year marriage, and why she and her husband recently separated, her close relationship with her daughter, her commitment to service, and how activism in controversial causes has bolstered her beliefs. And Turner reveals the pain and heartbreak of her struggle with rheumatoid arthritis, and how, in spite of it, she made a daring decision: to take a break from the movies and relaunch her stage career.

Along the way, Turner describes what it's like to work with legends like Jack Nicholson, Michael Douglas, William Hurt, Steve Martin, Francis Ford Coppola, John Huston, John Waters, Edward Albee . . . and, with characteristic irreverent humor, shares her behind-the-screen stories of dealing with all types of creative, intimidating, and inspiring characters.

Kathleen Turner has always known that she would play the lead in the story of her life. It's impossible not to take her lessons on living, love, and leading roles to heart. And it won't be long until you'll be sending yourself roses!