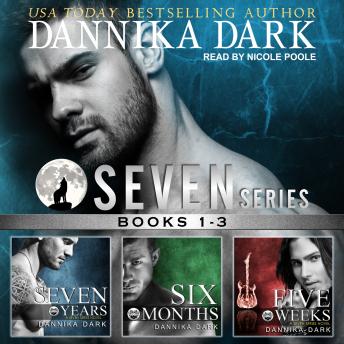 Seven Years: Lexi Knight hasn't seen Austin Cole since her brother's funeral seven years ago. Now a dangerous bounty hunter, Austin reveals he's also an alpha Shifter. But there's another shocking twist, putting Lexi's family in danger. Can their relationship be salvaged from the ruins of their past? Sexy, funny, and heartwarming.

Six Months: April Frost is a young woman who was set up for failure but refuses to become a product of her environment. After her father died and her drug-addict mother left her and her sister to live with their grandmother in a trailer, April focused on school to prepare for her future. But nothing could have prepared her for Reno Cole-biker, ex-military, and Shifter. Will April find her fairy tale ending? Dark, intense, and full of hope.

Five Weeks: Izzy Monroe loves the freedom of living a rogue life, but after settling down in Austin, she runs into the last person on earth he expected to see again. Jericho is a local rock star who lives in the fast lane, and Izzy's former best friend. Fate reunites two former friends living with one foot in the past and the other in the present. Old habits die hard, and sometimes the toughest addictions to shake are the ones that control our hearts. Suspenseful, wild, and chemistry that's off the charts.