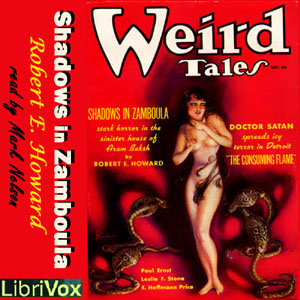 Despite a warning received in the Suq by an elderly desert nomad, Conan stays the night in a cheap tavern in Zamboula, run by Aram Baksh. As night falls, a black Darfarian cannibal enters to drag him away to be eaten. All of the Darfar slaves in the city are cannibals who roam the streets at night. As they only prey on travellers, the people of the city tolerate this and stay locked securely in their homes, while nomads and beggars make sure to spend the night at a comfortable distance from its walls. This night, however, Conan finds a naked woman chasing through the streets after her deranged lover; Conan rescues them from an attack by the cannibals. She tells him that she tried to secure her lover's unending affection via a love potion which instead made a raving lunatic of him. Promising Conan "a reward" in return for his assistance, they attempt to kill the high priest responsible for the man's madness. (Summary by Wikipedia)

The twists in this story had a surprise ending that I didn’t see coming. This Conan series is addicting.