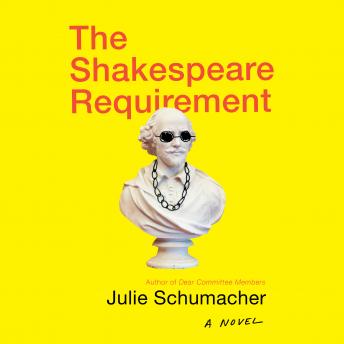 The Shakespeare Requirement: A Novel

The slings and arrows of outrageous fortune keep hitting beleaguered English professor Jason Fitger right between the eyes in this hilarious and eagerly awaited sequel to the cult classic of anhedonic academe, the Thurber Prize-winning Dear Committee Members. Once more into the breach...

Now is the fall of his discontent, as Jason Fitger, newly appointed chair of the English Department of Payne University, takes arms against a sea of troubles, personal and institutional. His ex-wife is sleeping with the dean who must approve whatever modest initiatives he undertakes. The fearsome department secretary Fran clearly runs the show (when not taking in rescue parrots and dogs) and holds plenty of secrets she's not sharing. The lavishly funded Econ Department keeps siphoning off English's meager resources and has taken aim at its remaining office space. And Fitger's attempt to get a mossbacked and antediluvian Shakespeare scholar to retire backfires spectacularly when the press concludes that the Bard is being kicked to the curricular curb.

Lord, what fools these mortals be! Julie Schumacher proves the point and makes the most of it in this delicious romp of satire.