Sherpa Hospitality as a Cure for Frostbite: A personal perspective on the tigers of Himalayan mountaineering 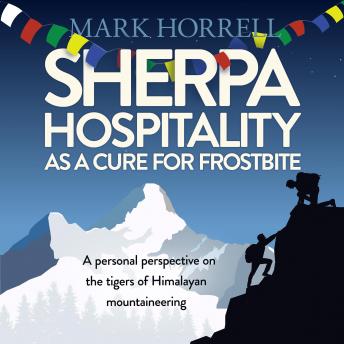 Ever since Europeans started exploring the world’s highest mountains and trying to reach their summits in the early 20th century, Sherpas have been an integral part of mountaineering expeditions to the Himalayas. In this anthology curated from his popular Footsteps on the Mountain blog, Mark Horrell explores the evolution of Sherpa mountaineers, from the porters of early expeditions to the superstar climbers of the present day.

Writing with trademark warmth and humour, he starts by bringing to life the Sherpa characters of the early days, describing their customs and superstitions, and putting their contributions and achievements into context.

In the deeply personal second section of the book, he covers some of the conflicts of the 21st century, when a series of high-profile controversies highlighted the tensions between Sherpas and western climbers on Everest. He was a witness to a devastating avalanche in the Khumbu Icefall that killed 16 Nepali mountain workers and led to a labour dispute, and he describes the events that followed from a commercial client’s perspective.

In the final section of the book, he brings the story up to date and looks to the future, as Sherpas have moved out of the limelight of westerners, running successful mountaineering expedition companies and becoming celebrated climbers in their own right.

Sherpa Hospitality as a Cure for Frostbite: A personal perspective on the tigers of Himalayan mountaineering

This title is due for release on April 29, 2022
We'll send you an email as soon as it is available!