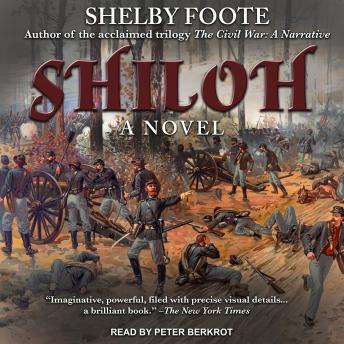 This fictional re-creation of the battle of Shiloh in April 1862 is a stunning work of imaginative history, from Shelby Foote, beloved historian of the Civil War. Shiloh conveys not only the bloody choreography of Union and Confederate troops through the woods near Pittsburg Landing, Tennessee, but the inner movements of the combatants' hearts and minds. Through the eyes of officers and illiterate foot soldiers, heroes, and cowards, Shiloh creates a dramatic mosaic of a critical moment in the making of America, complete to the haze of gunsmoke and the stunned expression in the eyes of dying men.

Shiloh, which was hailed by The New York Times as “imaginative, powerful, filled with precise visual details . . . a brilliant book” fulfills the standard set by Shelby Foote's monumental three-part chronical of the Civil War.

This title is due for release on April 9, 2019
We'll send you an email as soon as it is available!