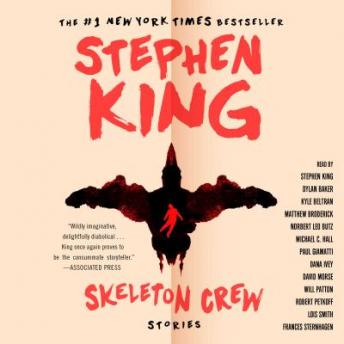 Features “The Mist” now a TV series event on Spike

The #1 New York Times bestseller and winner of the 1986 Locus Award for Best Collection, Skeleton Crew is “Stephen King at his best” (The Denver Post)—a terrifying, mesmerizing collection of stories from the outer limits of one of the greatest imaginations of our time.

“Wildly imaginative, delightfully diabolical…King once again proves to be the consummate storyteller” (The Associated Press).

A supermarket becomes the place where humanity makes its last stand against destruction. A trip to the attic becomes a journey to hell. A woman driving a Jaguar finds a scary shortcut to paradise. An idyllic lake harbors a bottomless evil. And a desert island is the scene of the most terrifying struggle for survival ever waged. This “wonderfully gruesome” collection (The New York Times Book Review) includes:

King is best known for his iconic, immersive long novels, but he is also a master of the short story, and this is a magnificent collection.

Not my most favourite book of novellas. I’d say 1/2 the stories were good, a few were great and the rest were ‘meh’.

You’ll mainly read it for “The Mist,” but the other tales are equally winning and haunting.

I've always enjoyed Stephen King's short stories as well as his novels. They are really awesome, he has a great imagination. The narrators are really good and they put a lot in to it!

This title is due for release on July 5, 2016
We'll send you an email as soon as it is available!