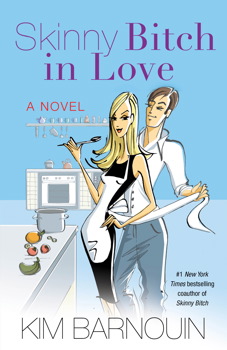 From the coauthor of the phenomenal #1 New York Times bestselling Skinny Bitch series—a clever novel “starring a sassy heroine” (Kirkus Reviews), a vegan chef struggling to make healthy choices both in and out of the kitchen.

From the coauthor of the phenomenal #1 New York Times bestselling Skinny Bitch lifestyle series—a clever, kick-ass novel about friendship, romance, and making healthy choices both in and out of the kitchen.

How bad could a little butter be? Bad enough to get rising culinary star Clementine Cooper blackballed from every vegan kitchen in Los Angeles after a backstabbing coworker sabotages the biggest night of her career. Fortunately, any vegan chef worth her salt knows how to turn lemons into delicious, cruelty-free lemonade cupcakes. Clem launches the Skinny Bitch Cooking School with dreams of opening her own neighborhood café. So she’s livid when sexy millionaire Zach Jeffries puts a fork in her plans with his new steakhouse.

When Zach signs up for her cooking class, however, she’s astonished. He’s far from the simple meathead Clem imagined him to be. In fact, he’s a very good kisser. Clem thought she was open-minded, but as she confronts the challenges of budding entrepreneurship, old rivals, ex-boyfriends, and two tempting suitors—a charming British vegan chef and a traitorously attractive carnivore—Clem wonders if she can ever say “I love you” to a man who hates tofu.