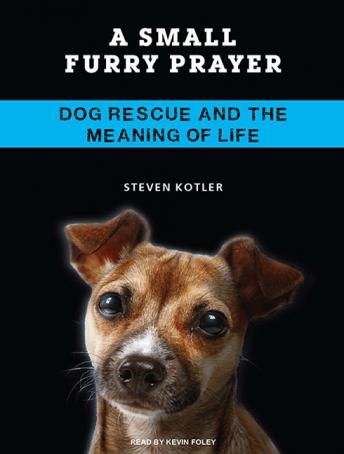 A Small Furry Prayer: Dog Rescue and the Meaning of Life

Steven Kotler was forty years old, single, and facing an existential crisis when he met Lila, a woman devoted to animal rescue. 'Love me, love my dogs' was her rule, and Steven took it to heart. Spurred to move by a housing crisis in Los Angeles, Steven, Lila, and their eight dogs-then ten, then twenty, and then they lost count-bought a postage-stamp-size farm in Chimayo, New Mexico. A Small Furry Prayer chronicles their adventures at Rancho de Chihuahua, the sanctuary they created for their special needs pack.

While dog rescue is one of the largest underground movements in America, it is also one of the least understood. An insider look at the 'cult and culture' of dog rescue, A Small Furry Prayer weaves personal experience, cultural investigation, and scientific inquiry into a fast-paced, fun-filled narrative that explores what it means to devote one's life to the furry and the four-legged. Along the way, Kotler combs through every aspect of canine-human relations, from humans' long history with dogs through brand-new research into the neuroscience of canine companionship, in the end discovering why living in a world made of dog may be the best way to uncover the truth about what it really means to be human.