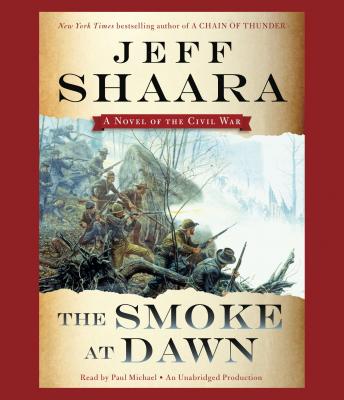 The Smoke at Dawn: A Novel of the Civil War

#3 of the Civil War in the West

Jeff Shaara returns to the Civil War terrain he knows so well, with the latest novel in the series that started with A Blaze of Glory and A Chain of Thunder. In The Smoke at Dawn, the last great push of the Army of the Cumberland sets the stage for a decisive confrontation at Chattanooga that could determine the outcome of the war.

Summer, 1863. The Federal triumph at Vicksburg has secured complete control of the Mississippi River from the Confederacy, cementing the reputation of Ulysses S. Grant. Farther east, the Federal army under the command of William Rosecrans captures the crucial rail hub at Chattanooga. But Rosecrans is careless, and while pursuing the Confederates, the Federal forces are routed in north Georgia at Chickamauga Creek. Retreating in a panic back to Chattanooga, Rosecrans is pursued by the Confederate forces under General Braxton Bragg. Penned up, with their supply lines severed, the Federal army seems doomed to the same kind of defeat that plagued the Confederates at Vicksburg. But a disgusted Abraham Lincoln has seen enough of General Rosecrans. Ulysses Grant is elevated to command of the entire theater of the war, and immediately replaces Rosecrans with General George Thomas. Grant gathers an enormous force, including armies commanded by Joseph Hooker and Grant’s friend, William T. Sherman. Grant’s mission is clear: Break the Confederate siege and destroy Bragg’s army.  Meanwhile, Bragg wages war as much with his own subordinates as he does with the Federals, creating dissension and disharmony in the Southern ranks, erasing the Confederate army’s superiority at exactly the wrong time.

Blending evocative historical detail with searing depictions of battle, Jeff Shaara immerses readers in the world of commanders and common soldiers, civilians and statesmen. From the Union side come the voices of Generals Grant, William Tecumseh Sherman, and George Thomas—the vaunted “Rock of Chickamauga”—as well as the young private Fritz “Dutchie” Bauer. From the Rebel ranks come Generals Bragg, Patrick Cleburne, and James Longstreet, as well as the legendary cavalry commander, Nathan Bedford Forrest. A tale of history played out on a human scale in the grand Shaara tradition, The Smoke at Dawn vividly recreates the climactic months of the war in the West, when the fate of a divided nation truly hangs in the balance.

Praise for The Smoke at Dawn

“Shaara’s mastery of military tactics, his intimate grasp of history, and his ability to interweave several supporting narratives into a cohesive and digestible whole . . . will appeal to a broad range of historical- and military-fiction fans.”—Booklist

“Top-notch . . . As with the best historical war novels, knowing the ultimate outcome of the bitter fighting is not a bar to engagement.”—Publishers Weekly

Weak history, I know it's fiction, but it should mirror the true events.

Great book and great narration! Incredibly interesting, detailed, while still being entertaining. Full of action and truly an excellent read.

This title is due for release on June 3, 2014
We'll send you an email as soon as it is available!