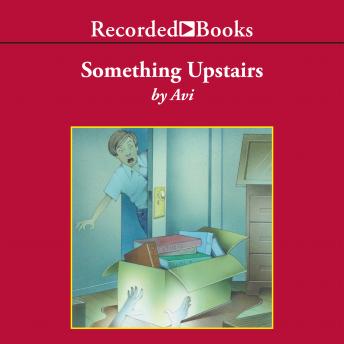 'What Kenny saw-or thought he saw- were two hands, then two arms, reaching up from the stain, pushing away a box of his mother's old books that was sitting on it. These hands and arms seemed to be not flesh and blood but sculptured, glowing smoke. It was as if, from under that box, a body was struggling to be free.'-from Something Upstairs Kenny Huldorf is not happy when he learns that he and his family will be moving all the way across the country to Rhode Island, a state smaller than Los Angeles, the city he's known his whole life. His new home, The Stillwell House, was built in 1789 and, like everything in Providence, it seems old-fashioned and somber. But things start to look a little brighter when Kenny's Mom shows him his new bedroom: a long, open attic with plenty of room and privacy. While he puts his things away, Kenny discovers a small room at the far end of the attic with a mysterious dark stain covering the center of the floor. All day long Kenny can't shake the feeling that someone is in the attic with him. Late that night, awakened by sounds coming from where the small room is, Kenny opens the door to a horrifying tale from the past.