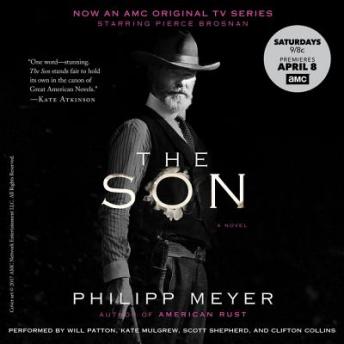 The critically acclaimed, New York Times bestselling epic, a saga of land, blood, and power that follows the rise of one unforgettable Texas family from the Comanche raids of the 1800s to the oil booms of the 20th century.

Part epic of Texas, part classic coming-of-age story, part unflinching examination of the bloody price of power, The Son is a gripping and utterly transporting novel that maps the legacy of violence in the American west with rare emotional acuity, even as it presents an intimate portrait of one family across two centuries.

Eli McCullough is just twelve-years-old when a marauding band of Comanche storm his Texas homestead and brutally murder his mother and sister, taking him as a captive. Despite their torture and cruelty, Eli--against all odds—adapts to life with the Comanche, learning their ways, their language, taking on a new name, finding a place as the adopted son of the chief of the band, and fighting their wars against not only other Indians, but white men, too-complicating his sense of loyalty, his promised vengeance, and his very understanding of self. But when disease, starvation, and westward expansion finally decimate the Comanche, Eli is left alone in a world in which he belongs nowhere, neither white nor Indian, civilized or fully wild.

Deftly interweaving Eli’s story with those of his son, Peter, and his great-granddaughter, JA, The Son deftly explores the legacy of Eli’s ruthlessness, his drive to power, and his life-long status as an outsider, even as the McCullough family rises to become one of the richest in Texas, a ranching-and-oil dynasty of unsurpassed wealth and privilege.

Harrowing, panoramic, and deeply evocative, The Son is a fully realized masterwork in the greatest tradition of the American canon-an unforgettable novel that combines the narrative prowess of Larry McMurtry with the knife edge sharpness of Cormac McCarthy.

Great book, but Patton should have read it himself. The woman narrators voice is insufferable, nasal and irritating. The other guy sounded like he was about to cry the whole time. Not a good choice. The narrators make or break a book. Not worth the money. Ill wait for the movie. I couldn't listen to this and I'm a huge will Patton fan.

Great book, but completely different from the TV series.

I absolutely loved all the narrators of this book. They did a fabulous job. What an account of the creation of Texas! Having lived in Houston for a long time in the oil and gas industry, I can’t help but be enthralled by these tails and wonder of some of their truths. I can feel the spirit of these types of characters in Texans today, the good and the bad. I’m probably going to listen to this again right away as I know there were things I may have missed. And, having not lived in Texas for a couple years, these characters make me somewhat homesick in a melancholy way. I’m sad this book is over and want to know more. I’m also going to look from more books from the narrator of Peter McCullough. I really enjoyed all the narrators, but his especially.

I drive a lot and enjoy listening to books to stay awake. I really liked The Son and found myself listening to it before bed and while I was putting my makeup on in the morning.

At first I did not know why the book was called "The Son". I had to go back to the beginning to hear Eli say, " I know why you did it, son." One view of the book is about having found deep true love. It is a marvelous book and I will probably read it again.