Songs of the Dying Earth: Stories in Honor of Jack Vance 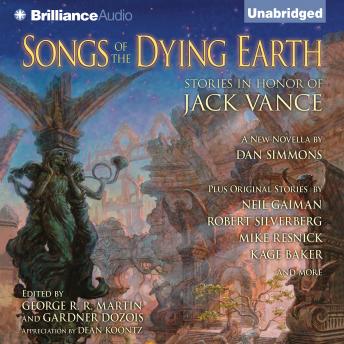 To honor the magnificent career of Jack Vance, one unparalleled in achievement and impact, George R.R. Martin and Gardner Dozois, with the full cooperation of Vance, his family, and his agents, have created a Jack Vance tribute anthology: Songs of the Dying Earth. The best of today's fantasy writers to return to the unique and evocative milieu of The Dying Earth, from which they and so many others have drawn so much inspiration, to create their own brand-new adventures in the world of Jack Vance's greatest novel.

Half a century ago, Jack Vance created the world of the Dying Earth, and fantasy has never been the same. Now, for the first time ever, Jack has agreed to open this bizarre and darkly beautiful world to other fantasists, to play in as their very own. To say that other fantasy writers are excited by this prospect is a gross understatement; one has told us that he'd crawl through broken glass for the chance to write for the anthology, another that he'd gladly give up his right arm for the privilege. That's the kind of regard in which Jack Vance and The Dying Earth are held by generations of his peers.

Songs of the Dying Earth: Stories in Honor of Jack Vance

This title is due for release on November 15, 2009
We'll send you an email as soon as it is available!